by Jason Lee
in Food & Drinks
0

Hydroponics is the process of growing plants indoors without the use of soil. All the necessary nutrients required for plant growth are supplied through a nutrient solution to the roots of plants. The nutrient solution keeps the plants hydrated and fed. It uses supplemental lighting solutions in place of sunlight. Hanging lights above the plants mimic the natural cycles of daylight and darkness, which is necessary for plants to grow. In the hydroponics method, plants can also be grown on a soil-free medium such as rock wool, coconut, perlite, or vermiculite. This crop production technique can be used on small-scale or large-scale commercial operations. The hydroponic system allows minute control over environmental conditions such as pH balance and temperature and maximizes exposure to nutrients and water. Some plants grown in a hydroponic system include herbs, tomatoes, peppers, strawberries, and lettuce. The hydroponic farming technique provides various benefits such as improved growth, high crop yield, less water consumption, and higher plant density. 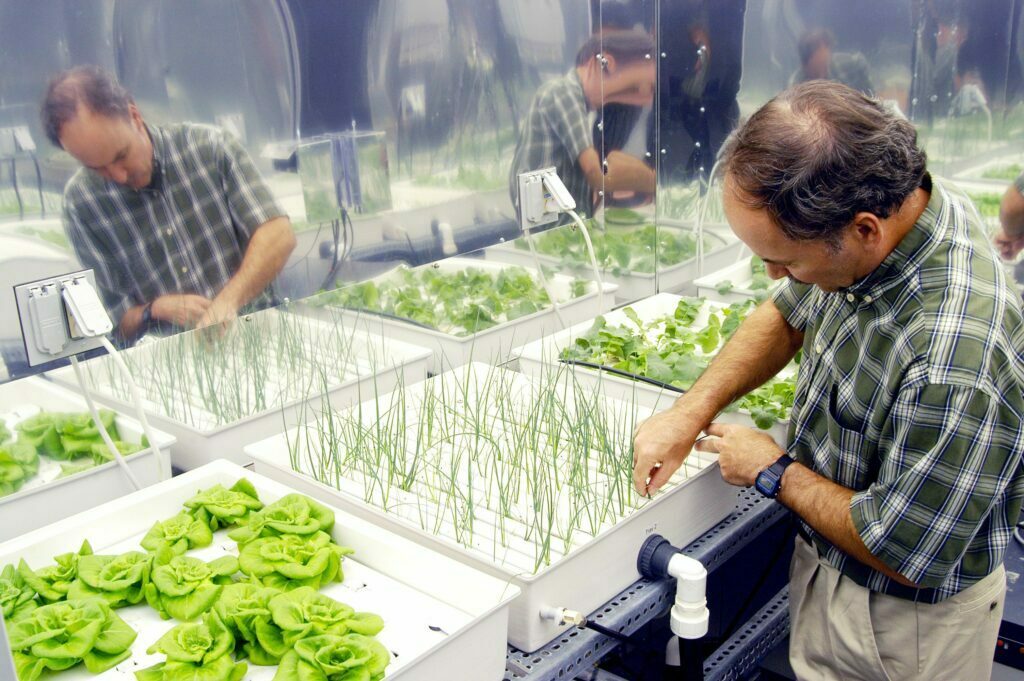 Hydroponic systems have revolutionized the agriculture industry, increasing popularity among commercial and home growers. A hydroponic system is being widely used in indoor farming across the globe. It provides a high yield and more vital crops as plants feed a nutrient-rich solution.

Growing consumption of nutrient-rich food products on account of rising health concerns among consumers is driving the demand for high crop yield and nutrient-rich produce. It is likely to bolster the farmers’ adoption of the hydroponic agriculture system. Additionally, rising consumer awareness about the harmful impact of pesticides on agricultural produce is also propelling the market growth globally.

Expanding the populace across geographies is fueling the demand for food. The global population is expected to reach around 10 billion by 2050. It is likely to drive the demand for high crop yield and, thus, hydroponics market growth.

A hydroponic system is used to grow various crops such as peppers, lettuce, strawberries, tomatoes, cucumbers, celery, watercress, and herbs. This farming technique is widely used to cultivate cannabis on account of the legalization of marijuana. Tomatoes are the largest cultivated crops using hydroponic due to their fast cultivation rate and requirement for less water. Tomatoes accounted for the largest market share in 2021. Lettuce is the most profitable crop if grown under a hydroponic system as this system’s cost of operation is low. Maintaining one square foot of lettuce costs around USD20.

Rising awareness about the advanced farming technologies in developing countries is expected to create lucrative growth opportunities for the market players.

Geographically, the Asia-Pacific region held the largest market share in 2021. The regional growth can be attributed to the high adoption rate of hydroponic farming practices in China, South Korea, and Australia. Expanding populace in China and India is fueling the food demand in the region and, thus, driving the market growth. North America holds significant growth potential as the farmers are emphasizing adopting technologically advanced farming solutions to increase crop yield and thus, meet the ever-increasing demand for nutrition-rich food products.

Europe held the second largest market share in the global market. Key countries driving the market growth in the region include Germany, France, Italy, and Spain, among others. Growing emphasis on genetically modified crop technology is the key factor driving the regional market growth.

Changing consumer behavior coupled with rising per capita disposable income is likely to propel the growth of the global organic...

Controlled environment agriculture (CEA), also known as indoor farming, is a practice of growing produce in a closed ecosystem. It...