by Jason Lee
in Food & Drinks
0

The consumption of plant-based protein food products has increased significantly among consumers due to rising health concerns such as cardiovascular diseases, diabetes, and cancer, among others. Rising incidences of cardiovascular diseases are driving the demand for protein-rich diets. People who consume a vegetarian diet are less likely to have heart diseases. Plant-based diets are lower in saturated fats, hormones, and iron. The presence of Phytochemicals in plants also helps to prevent cancer. A healthy plant-based diet is likely to decrease the risk of stroke by 10%. People who follow a plant-based diet are also less likely to be overweight.

Increasing adoption of veganism among people because of rising awareness about healthcare and environmental concerns is fueling the demand for plant-based protein products. Plant-based protein food provides various necessary vitamins and minerals. The production of meat-based products involves using more resources such as land, water, and energy than vegan food products. 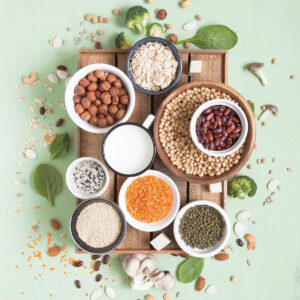 The growing trend of becoming vegan substantially drives the demand for plant-based food products. The key countries where veganism is gaining popularity include the United Kingdom, Australia, Iceland, Mauritius, New Zealand, Estonia, Canada, and the United States. As per the United Nations, around 79 million people are vegan as of January 2021. The number of participants who signed up for Veganuary’s 2021 challenge in the US increased by 25% compared to 2020, reaching over 5,00,000.

The plant-based food products consuming population has reached new heights across the globe on account of changing consumer perspectives on the meat industry and its impact on people, animals, and the planet. Rising incidences of animal protein intolerance also increase consumers’ consumption of plant-based protein products globally.

Most big food companies such as Nestlé, Kroger, and Unilever emphasize having a dedicated team to develop new and innovative plant-based products to stay competitive in the marketplace. With the ever-increasing consumption of plant-based food products, more and more food manufacturing companies are likely to enter the plant-based food market.

Consumers are becoming very conscious about the food they consume and how it affects their daily life and health. It has led to high demand for protein-rich diets, mainly plant-based diets. In addition, rising health awareness among consumers is expected to create lucrative growth opportunities for the players operating in the global plant-based protein market, particularly in developing regions. The outbreak of covid-19 further resulted in increased consumption of plant-based protein food products such as broccoli and beans to boost immunity.

With the significant surge in demand for plant-based protein products, the manufacturers are likely to infuse genetically modified ingredients into the food products, which poses a significant threat to the global market growth. Additionally, some people are allergic to the consumption of plant-rich protein products, which is expected to restrain the market growth. For instance, anti-nutritional components that are present in soy can cause allergies when consumed. Also, soy protein has large quantities of phytic acid, which can block the absorption of essential minerals, such as magnesium, calcium, copper, zinc, and iron.

Geographically, North America accounted for the largest market share in 2021. The regional market growth can be attributed to a sizeable vegan populace, particularly in the US. The retail sale of plant-based foods in the US increased by 11%in 2019 compared to 2018, reaching around USD 5 billion. Furthermore, consumer spending on plant-based food reached USD 40 billion in 2021, a 6% increase compared to 2020 and a 54% increase over the last three years, according to a study from Good Food Institute (GFI) and the plant-based Foods Association. The market in Asia-Pacific is expected to witness the fastest growth in the coming years due to the rising adoption of veganism among consumers and rising healthcare awareness. Government support aimed at increasing consumption of plant-based food products on account of rising health and environmental concerns is also promoting the market growth in Asia-Pacific. The Food-Based Dietary Guidelines of China encourage the consumption of plenty of vegetables and soybeans in the country. The Chinese government is encouraging consumers to reduce their meat intake by 50%.

Changing consumer behavior coupled with rising per capita disposable income is likely to propel the growth of the global organic...